Abduction + Memory + Time + Fireworks + Dispersal is the 15th episode of Season 5 of MacGyver (2016 series). This also serves as the final episode of the series.

When Mac and Riley go missing and wake up 24 hours later in a corn field with no memory of how they got there, they must unravel the mystery to find who took them, and how to get rid of the Nano-trackers in their bodies, no matter the cost.

Mac is led to a room with the Gatekeeper. It is an underground casino. Everyone played something.

Soon enough, Riley and Macgyver are missing and their tags go offline. Maddy calls it a priority to find them as they are missing. 24 hours later, they are still missing. Mac checks in saying e is fine. All them meet up at a place, but don't recall the past 24 hours. As they were at headquarters,they are told that they were experimented on as lab-rats. The pair are allowed to leave, but have to be under one roof with a tag team. At the house, Mac and Riley are there trying to figure out things. They decide to try to recreate the stae-dependent memories and make it set up, once again. They haven't really figured out it but decide to sleep a bit on it; this allows some memory to return for Mac. Uneasy, he gets up and try something else. They wake Desi and they use a secret escape hatch.

The trio enter a hideout that Macgyver had prepared in case Murdoc had returned. Then exit onto the neighbor's property, and tried to get a favor from a cleaning place that gave a car for the moment to use. They remember places and drive to a location they know they were taken captive location. Russ Taylor knew it was them and appears. Maddie wants to know if there is anything left remainder, but but nothing. They get info that they got a partial face print of one of them, and they got it to be someone at a pharmaceutical company. She is brought in to questioning.

Meanwhile, two members of the mentor group Riley has been training, is brought into to recover contents from a broken hard drive. It shows videos of the two under mind control and even engage in combat.

The woman captive reveals that the US government had funded a project that allows government mind control and that the company needed to real life test subjects. Mac and Riley had the hardware and the company just launched the software. Conventionally, the terrorist was targeting a celebration in Washington D.C.

Taylor, and Boser cause a distraction where Riley can look at things. Desi made some effort to fight. They find the planned contents in it so that will be spread via fireworks. Mac hot-wires it so that the explosives could destroy the contents in the fireworks. The person is arrested and taken into custody.

At a fireside celebration at Mac's house, they all get drinks. All of them decide to go through hypobaric chambers to get rid of the nanobots. A briefing meeting later, the team decides that they could not in good conscience work with the government like that. So all of them resign. As a result, the Phoenix foundation decide to not take on government contracts and go on their own adventures. A toast is made to a new future. 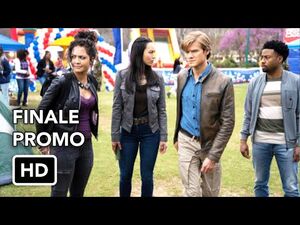 Retrieved from "https://macgyver.fandom.com/wiki/Abduction_%2B_Memory_%2B_Time_%2B_Fireworks_%2B_Dispersal?oldid=16855"
Community content is available under CC-BY-SA unless otherwise noted.