Bravo Lead + Loyalty + Friendship is the 2nd episode of Season 3 in the 2016 reboot version of MacGyver.

When Jack receives an emergency distress signal from one of his old Delta buddies who is falsely accused of terrorism in a foreign country, MacGyver and Jack quickly recruit the rest of Jack's old Delta team and stage an unsanctioned rescue op.

Matilda Webber: It's time to let the Teen Titans loose on their own op.
Riley Davis: I'm Raven.
Leanna Martin: Starfire.
Both while looking at Bozer: Beast Boy.

Angus MacGyver: I got to say, I'm amazed. Every one of these guys put their life on pause immediately to go save Worthy.
Jack Dalton: Yeah, well, Worthy's the only reason these guys have a life to pause.

Caleb Worthy: Fire in the hole!
Everyone: South of the border still not in hell.
Jack Dalton: Worthy! You're an animal.
Just get me home, Jack.
Jack Dalton: You just got us all home, brother.

Caleb Worthy: You're the bravest man I know. Don't waste it, all right? J

Caleb Worthy: Hell of a reunion, fellas.
Angus MacGyver: Save that for American soil. Let's get out of here.

Jack Dalton: Yeah, Cairo for me and Mac was like, uh, Djibouti for all of us, you know, the grim reaper was in the neighborhood, he just had the wrong address? South of the border ALL: still not in hell.

Jack Dalton: This is it, boys. Blood makes the grass grow. 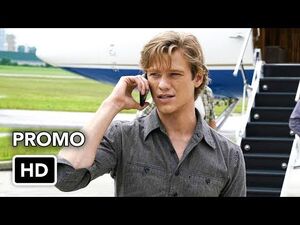 Retrieved from "https://macgyver.fandom.com/wiki/Bravo_Lead_%2B_Loyalty_%2B_Friendship?oldid=16503"
Community content is available under CC-BY-SA unless otherwise noted.