C8H7ClO + Nano-Trackers + Resistance + Maldives + Mind Games is the 11th episode of Season 5 in the 2016 reboot version of MacGyver.

In Washington DC, Mattie is on a date with a man. It is a friend of hers. She receives a call from the Phoenix Foundation from Russ Taylor and that they had to focus their attention the Republic of Sperska. They get ready to go to Bosnia and Herzegovina.

In a hotel, Mac and Riley want to discuss their feelings but Mattie calls. They link up by talking to Anya Luka, who is an informant in there, and they discuss issues in the country, as the resistance leaders were being arrested. Someone is figuring out who they are as the movement of democracy is suffering blows.

Mac and Riley are sent there while others have other commitments; Russ Taylor is working at secure more government contracts, Mattie is in Washington D.C. Talking to the joint Chiefs, and the others are doing other items.

On the plane, Riley discovers police locations approximately where they took the leaders of the democracy movement. At Pheonix, Mattie had sent someone to help Taylor as a substitute for the moment. Taylor wanted the Pheonix to be hired as a partner in the joint research of the Department of Defense and the UK Ministry of Defense.

On the ground in Bosnia, Riley and Mac end up fighting guards where they went. Entering a command post, they witness a room for surveillance where info lists their contact Lazar is dead, amid where the people had tracked the amount of leaders. Guards tried to break through a locked door, but the group escape via a chute.

AT the Pheonix, Taylor realizes some of the technology used, he recognizes and the person who invented it. They receive communication from Desi, who is in the Andes Mountains posing as a nun at a monastery. She beats off two mercenaries and Boser plans her escape.

Mac and Riley meet up with their contact, who take them to their own homebase. Mac uses some makeshift technology to detect a chip that is embedded in her, enabling the technology to track all of them in real time.

Talor is told that Boser is take point. Meanwhile, a prisoner is interviewed as he was the one who created the tracking chip. A meeting of the two trade barbs. Taylor has asked questions for more information, and got it from each two others ask questions truthfully.

At a protest in Sprska, Riley and Mac are watching. Police arrive and arrest people, and deploy gas that tag a lot more people with the nanotechnology tag chips. Meanwhile, the Interview with the creator has gained information on how to counter themselves including working against the cell towers. Mac and Riley escape with several resistance members and lead into the woods. At a hideout, they hear sounds of drones and fight. Both had to enter a river to cool their temperatures and use a thermal blanket to attempt in destroying the chip; it worked.

Back at the Andes, Desi had to escape amid gunfire. She got something from a tag team from Peru and escape from a helicopter.

At a church, the police are after them, but protestors come and distract them so that Mac and Riley could reach the top of a tower, where they beat people to not work. They got a shut down sequence and it works, shutting them all down for everyone. AT homebase, they are happy everything resolved and that the protest can occur with no fear.

Taylor is resolved that the person's lab was discovered but is perplexed that the information was leaked to the public. On the plane back, Mac and Riley reconnect a bit and see the news that the protests worked. They find nano technology and wonder what will happen to them. 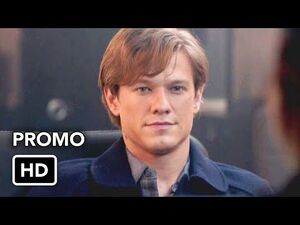 Retrieved from "https://macgyver.fandom.com/wiki/C8H7ClO_%2B_Nano-Trackers_%2B_Resistance_%2B_Maldives_%2B_Mind_Games?oldid=16675"
Community content is available under CC-BY-SA unless otherwise noted.