Cigar Cutter is the 21st, and final episode of Season 1 in the 2016 reboot version of MacGyver.

Murdoc moves forward with his plans for revenge against MacGyver by recruiting his recently released former cellmate to infiltrate Phoenix Complex as a “lab technician” and kill every agent inside, on the first season finale.

Murdoc chokes a Guard and Escapes. Which will lead into DIY or DIE.

Riley Davis: Oh, and you just missed Mac. He brought flowers.
Wilt Bozer: Never was much of a green thumb, but damn if he can't teach Martha Stewart a thing or two about duct tape. 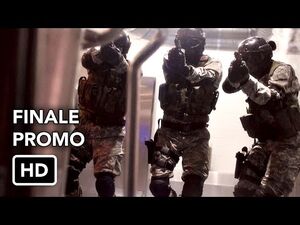 Retrieved from "https://macgyver.fandom.com/wiki/Cigar_Cutter?oldid=16857"
Community content is available under CC-BY-SA unless otherwise noted.