While on a mission to hunt down a Codex lead, Mac and the team discover Murdoc hacked their comms and has recorded them for months. Now, Mac and the team must stop Murdoc, who is working with Andrews , as they plot to kill thousands and reveal each Phoenix member's most-guarded secrets.

MacGyver is making something as he has beakers bubbling with chemicals in all different colors in his kitchen when Bozer enters. He shows Bozer the diamond he made and explains that he is going to propose to Desi. Bozer looks happy for his friend but he also seems concerned and kind of skeptical about this idea, foreshadowing his concern for Riley later in the episode.

They are summoned to the briefing room, but Bozer stops Riley after everyone else has gone in and reveals to her that Mac planned to propose to Desi but the rest of the conversation is not shown on screen. They gather in the briefing room wondering where Matty is before she comes on the screen through a video chat startling them all. She briefs them over the video call as she's discovered to be out of town. Mac, Desi, and Riley are told they are going to Mexico city to find the person who sent the world wide wake up call to every Codex operative in the world.

They arrive a public square in Mexico City, where they use their communications to talk while they look for anyone suspicious. Mac attempts to communicate with Desi and Riley over their comms but he gets a crackly static feed through his device and he hears someone speaking but it's unintelligible. He asks Riley and Desi if they heard it and Murdoc's voice comes through. He is told he has to participate in a twisted mind game and if he refuses or takes his communications device out Desi and Riley will both die. He is instructed to get to a tower in 30 minutes. He glances over at Desi but then focuses his attention on Riley until he runs and grabs Desi's map out of her hands and glances at it and tells Murdoc as if he wasn't already aware of it, that the tower he expects him to get to in 30 minutes is on the other side of the city exasperatedly before running off leaving Desi and Riley clueless.

Taylor and Bozer are in one of the many labs at the Phoenix watching Mac and the girls as Matty isn't there to do it. Taylor is discovered to be able to read lips while Bozer is definitely not. Taylor figures out that Mac said Murdoc and they are greeted by the sound of Murdoc's sing song voice. They find out their Communications System was hacked three months ago and initially they thought Murdoc had just hacked into the system but they find out via Riley that their comms were all on Murdoc's system instead which is much, much worse and on top of that Murdoc obviously managed to escape from their black site 3 months prior at the same time their comms system was hacked.

As Mac arrives, Andrews reveals himself and Murdoc reveals that they decided to team-up and work together. They wanted to use an earthquake damper in the building to start an earthquake, which was activated; the building was constructed on a fault line. Unbeknownst to Mac and the girls. Riley hacks into the locator in Mac's comm device in order find out where he is going.

They manage to get to the building and arrive at a patio opening on top of the building where they meet up with Mac. Murdoc tries to manipulate them by playing a recording of Bozer and Riley's earlier conversation in which Riley tells Bozer out loud that she had feelings for Mac and she moved out because everytime she saw them together her heart broke a little more. Desi seems to already know about Riley's feelings for Mac as she immediately tells them that they can talk later and even as Desi knows he might not choose her in the end she has Riley's back and reminds her not to let Murdoc get into her head. Riley tells her he already is before Mac improvises a way to break the glass and get inside the building.

In Phoenix Foundation headquarters, Russ is forced to tell Bozer that his ex girlfriend Leanna was killed 6 months prior while on a deep cover op, but Russ convinces him to stay focused as Murdoc waited until they were close to disclose that information.

Inside the building, Murdoc and Andrews capture Mac, Riley, and Desi and force Riley and Desi to tie themselves up. Then to their horror Andrews over what looks to be a Zoom meeting, announces to the leadership of the remaining Codex Operations that he was going to prove that he should be elected as the new head of Codex by killing MacGyver and Riley and Desi as Murdoc who didn't know anything about this plan stands off to the side fuming. Murdoc ends up helping Andrews anyway and as Murdoc is about to kill Mac, Bozer plays a high pitched noise through Murdoc and Andrew's comms that causes them to scream in pain and distracts them giving Desi time to knock Andrews out and kick Murdoc's butt after cutting Riley's restraints off so she could go and help Mac deactivate the earthquake damper and then get him to safety. The police arrest Andrews and Murdoc and Mac who has been bandaged up by the EMTs goes over to Riley who looks like she's about have a panic attack or start crying or both and they talk about her feelings and Mac tells her "Emotions are not a science. They can't be controlled." They find out the zoom meeting was enough to track the sleeper cells and arrest them all.

In the end, at headquarters, they put aside their feelings and come to gather and hear a rousing speech by Russ Taylor, admitting his faults and sincerely apologizing to Bozer for hiding Leanna's death from him. Later, Mac, in spite of Desi's request to forget the last twenty-four hours, shows up to Riley's apartment, asking if her feelings for him have truly gone away... 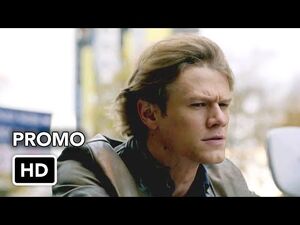 Retrieved from "https://macgyver.fandom.com/wiki/Diamond_%2B_Quake_%2B_Carbon_%2B_Comms_%2B_Tower?oldid=16648"
Community content is available under CC-BY-SA unless otherwise noted.