Father + Bride + Betrayal is the 14th episode of Season 3 in the 2016 reboot version of MacGyver.

An international crime boss offers Matty a deal she can't refuse — he'll surrender himself into her custody if he's allowed to return to the United States to watch his daughter walk down the aisle. MacGyver and team crash the wedding to ensure the crime lord doesn't run, only to discover they're not the only ones lying in wait at the event.[1]

Jack is watching the news on TV, where there is news of an explosion at the Budapest consulate, killing eighty-one people. Mac knocks on the door of his condo and walks in, asking what's going on. Jack insists that the explosion isn't a terrorist attack but instead is Tiberius Kovac. He reveals that he received an anonymous text a few days prior[2] containing an image proving that Kovac is alive and in the USA. He thought he killed Kovac years ago. There's a massive task force being assembled to hunt Kovac, and Jack is going to lead it. Mac asks to join the task force, but Jack turns him down. He said that this is goodbye.

Alonzo Olvera, an international black market arms dealer, offers to turn himself in and provide Matty with details of his operation if she will give him safe entry into the United States to walk his only daughter down the aisle on her wedding day. Matty agrees, but has Mac, Jack, Riley and Bozer pose as wedding guests to make sure Alonzo doesn't try to escape. Armed thugs, thought to be irate arms customers of Alonzo's, storm the wedding reception. After they are captured, Alonzo is found to have been killed via cyanide injection. Mac deduces that a wedding guest, someone very close to Alonzo, is behind the attack. After a successful capture of the perpetrator, Jack tells the group that he is leaving on an open-ended mission to take down international terrorist Tiberius Kovac, whom Jack originally thought was killed in an explosion.

Matilda Webber: Why me?
Alonzo Olvera: That's easy. Out of all the federal agents that I've crossed paths with, I know that you're the only one that would keep her word. 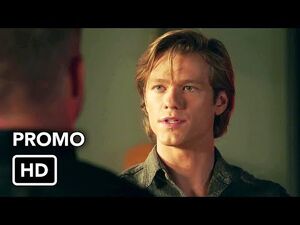 Retrieved from "https://macgyver.fandom.com/wiki/Father_%2B_Bride_%2B_Betrayal?oldid=16476"
Community content is available under CC-BY-SA unless otherwise noted.