Golden Lancehead + Venom + Pole Vault + Blood + Baggage is the 7th episode of Season 5 in the 2016 reboot version of MacGyver.

The secret experimental cancer treatment Mac's developing with a friend is discovered when culprits ransack their lab, kidnap Mac's partner and plan to use the research to create a powerful new nerve agent.

Some time ago, MacGyver had went with a friend Frankie to a place outside of Sao Paolo Brazil to obtain venom from a golden lancehead snake. They are told that because someone died trying to get a snake, they would have to extract them venom themselves. They did and return to the United States. Frankie uses it to develop technology.

Fast forward to today, MacGyver visits Frankie in a lab. He is called to his car by Desi, who followed him. They go back inside and see that the place was attacked by mercenaries. They fight them off but she has gone missing prompting a search.

They trace a cell phone signal to a local park, and try to hunt for the person. Riley uses a script to overheat the cell phone battery, prompting a person to dump it. Mac sees a person leaving and confronts her; She is Nina Harris, an employee from the Department of Defense. Russ Taylor listens on and realizes she is much deeper in the department in “black budget”, that is no one knows about it at all.

Mac realizes something and returns to Frankie’s lab, and finds a journal written by Frankie hidden in the ground.

At Phoenix Foundation headquarters, the group collect information and compile them together. Information tracks to the Eucalyptus Hills, California. Mac, Riley, Desi, and arrive at a lab and enter. They find a lab with a lot of snakes and Frankie locked in a lab. Two of the goons arrive and beat them up; this allows them to free Frankie. However, several lance head snakes are set free, but MacGyver uses a ultrasonic sound from the alarm to incapacitate some snakes so they can escape. Frankie also tells them that the snake venom was already completed.

Director Webber and Taylor pour over the tactics and realize it seemed familiar.; they confront Nina Harris; there they determine that the assault on the lab as contracted by her to a private military company to fake the attack. After the attack, they would come and pretend that they will offer protection. This failed as the mercenaries have gone rogue; one of them is a former dishonorably discharged marine who had worked in the company and that the nerve agent could be used to attack some place.

Two of the mercenaries are tracked and taken into custody on a road. Searching the trunk, the team find only half the nerve agent. The third mercenary went into the Sandiego Airport to board a plane. It is evacuated and MacGyver and Riley enter the baggage check place with the help of Riley to find it. Knocking out the mercenary, they retrieve the nerve agents a and restore order. At the headquarters, Webber reveals that when they searched a cellphone, there was a phone call to a location with a location and a signature; it was Codex and that it could have meant someone is putting the band back together. 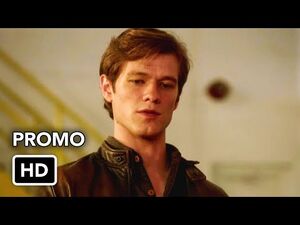 Retrieved from "https://macgyver.fandom.com/wiki/Golden_Lancehead_%2B_Venom_%2B_Pole_Vault_%2B_Blood_%2B_Baggage?oldid=16645"
Community content is available under CC-BY-SA unless otherwise noted.