MacGyver and Riley, with the help of Vasil, a distraught father, must find a way to drive a tanker filled with liquid oxygen through a region occupied by rebels and deliver it to a children’s hospital before they run out. Also, Riley helps MacGyver decide whether or not to allow his father back into his life.

In the AbuStar Tower One building in Abu Dhabi, a woman is showing a condominium to a couple. Mac and Riley burst in, surprised that the building isn't empty. The woman explains that potential buyers are being shown units by appointment only. Mac and Riley hustle the three into the unit's nursery. Mac grabs some stuff then he and Riley leave, instructing the realtor to lock the door behind them. She does so, then calls emergency services while gunfire is heard in the distance. The sound of fire whooshes nearby, then Riley knocks on the nursery door and informs them that they are safe. They emerge to see a lot of fire damage, plus three men tied to chairs. The realtor tells Mac that she has called the police. He approves, and says that if they have any questions they should contact Matty Webber at the Phoenix Foundation in Los Angeles.

Riley Davis: Okay, yelling at him didn't work so how do we make him stop this truck?
Angus MacGyver: We don't? We stop it for him.
Riley Davis: (horrified) Pretty sure that's Mac code for 'I'm about to do something really dangerous.'

Riley Davis: How're we gonna do this, Mac? Thing's gotta be about sixty thousand pounds.
Mac ignores her, staring at the problem.
Riley Davis: Mac?
Angus MacGyver: Uh... Mac runs off.
Vasil: He... he don't answer you!
Riley Davis: Yeah, believe it or not that's a good thing. Means he has an idea.

Angus MacGyver: When I was a kid, especially after my mom died, I idolized him. He was smart and tough, and the way he made things out of nothing absolutely amazed me. And then when he left without saying a word, it was like I tried to convince myself there was a good reason. You know, like, maybe he had amnesia and couldn't find his way home, or he was framed for a crime and wrongfully imprisoned. Then years passed, and eventually, I just gave up believing there was a good reason. I began to forget what he once meant to me and started imagining he was a drunk or a criminal. Picturing him as someone you didn't want made it easier to accept he didn't want you.

Angus MacGyver: So your whole story was a lie, then?
Vasil: I have a wife and three children. They're not sick, but they are very much in danger. That's why I need the money. To get them to safety.
Angus MacGyver: So you're gonna let all those other children die?
Vasil: I'm not proud of it. But if the choice is between my children and complete strangers, what can I say?

Matilda Webber: Turkish ambassador says there's a hospital just over the border, 40 minutes away. They have a full tanker of liquid oxygen, but he's refusing to send any of his people into rebel-occupied territory.
Wilt Bozer: What do I do? Am I allowed to threaten him?
Matilda Webber: Just hang up.

Angus MacGyver: All we have to do is connect the outflow valve from this chamber to the hospital's oxygen converter, which should refill the O2 tanks and supply breathable air to the kids.
Riley Davis: Why didn't the hospital do this immediately!?
Angus MacGyver: Ah, that's my fault. I just made that sound a lot easier than it's actually gonna be. 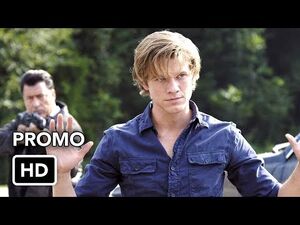 Retrieved from "https://macgyver.fandom.com/wiki/Guts_%2B_Fuel_%2B_Hope?oldid=16499"
Community content is available under CC-BY-SA unless otherwise noted.