Improvise is the 1st episode of Season 3 in the 2016 reboot version of MacGyver.

Three months after quitting the Phoenix Foundation and moving to Nigeria, Mac puts aside his differences with his father and returns when he hears Jack is the target of a murderous dictator he double-crossed.

Jack Dalton: What's the plan?
Angus MacGyver: Get the hell out of here.

Jack Dalton: You know, I was kind of thinking since I'm the only reason you're even in power in the first place, maybe you could do us a solid and-and not kill our friend.

Jack Dalton: You need to put this personal BS with your old man to the side and realize this is exactly where you're supposed to be, on the razor's edge with your boy, cheating death. 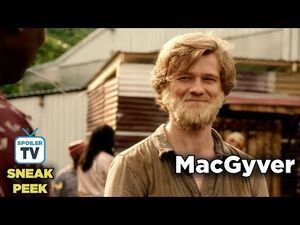 Retrieved from "https://macgyver.fandom.com/wiki/Improvise?oldid=16506"
Community content is available under CC-BY-SA unless otherwise noted.