Jack + Kinematics + Safe Cracker + MgKNO3 + GTO is the 5th episode of Season 5 in the 2016 reboot version of MacGyver.

Using a cryptic postcard as their only clue, Mac and the team must solve a fallen friend’s final case and bring him justice.

A funeral is held for Jack Dalton, who died on duty. The team attends his funeral. His dog tags are presented to MacGyver.

At a wake, it turns out to be a party. His CO tells MacGyver about the manner of his death. They were going after a terrorist in a raid but the guy took himself out.

Riley and Mac are at an arcade when they catch up on some things. At home, MacGyver looks at his mail when he sees a suspicious mail that had a name named Ozzy Ulrich. It was a postcard sent by Jack using a pseudonym with a date 2 days after he died.

At Phoenix headquarters, they analyze and it leads to Zagreb, Croatia. It was intentionally done so that the team would be interested and was meant to be a fail safe. The address is an apartment and was paid a year in advance, with things ready if he did not return. The team arrives in the apartment as a safe house and content for the team to find; that item was a hand drawing of a Egyptian eye. When looked at a way, it pointed to a false wall that hid a safe; MacGyver got into it and retrieves a picture. Info scans of the image result a Timor Bobac, a local smuggler.

A local leader Vitez of the Interpol anti-terror squad comes in because she found Russ Taylor came to Croatia. At Interpol local headquarters, they gather together and reveal things. They decide to find the guy and reach his warehouse, where they capture him and take into custody. He knew Jack as a friend and got to work together and never met Kovac. They had bugged him. Kovac came to Bobac and demanded new identities; it turns out Kovac had set up a fake raid to appear dead to the authorities and Jack dies in a raid. Jack had suspected a raid so he had everything set up.

They decided to have Timor meet Kovac. A car pulls up and it explodes; this prompts men in two Suvs come and engage in a shootout. MacGyver uses his typical skills to make a makeshift machine guy and kill most of the gunmen, but able to take one captive.

Bobac had held out one thing; jack had him wanted to tell MacGyver a reminder of the Vegas trip. They realize that “Kovacs” is purely an online persona that is fake; there is no person who is Kovacs. Jack was close to figuring out who was the one who leaks. They attempt to interview the captive but a sniper kills him. Mac goes to find the sniper but Riley stays to get bloody finger prints of the dead captive, hoping it leads something.

They find the shooter on a street and vie chase. Splitting up, they find him and knock him out; it was apparently the guy is a currently member of the military.

It turns out the Interpol agent they worked with is Kovacs; she shoot’s Bozer’s leg so convince Riley she will do anything. Taking Riley and Bozer captive, Mac, Russ, and Riley, are too late. Vitez holed up themselves on the fifth floor of a construction site. She demands Riley to open her laptop and enter the password. Vitez was just earning extra money at the behest of corporations; Vitez was setting them up.

The team came to the place and take out the guards and send Vitez into custody. A job well done, the group head home. They pay tribute to Jack. In honor of Jack, Mac and Riley watch a Die hard marathon. In Jack’s will, he gave all the Metallic t-shirts, and Riley gets the Pontiac GTO.

Mac: Because you just swore on the lives of your children that you didn't know the man.

Tibor : That is not how that goes.

Tibor: You leave me no choice but to use the ace in my hole.

Wilt: That is not how that goes.

Desi: Jack was many things. Sophisticated was not one of them.

Russ: Once more, we raise a glass to the fall, to the beloved we've lost, to the heroes of days gone by. And those who live on, and honor them. To Jack. 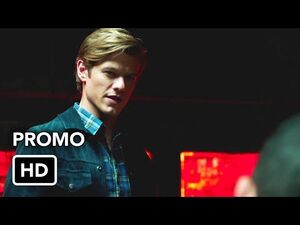 Retrieved from "https://macgyver.fandom.com/wiki/Jack_%2B_Kinematics_%2B_Safe_Cracker_%2B_MgKNO3_%2B_GTO?oldid=16643"
Community content is available under CC-BY-SA unless otherwise noted.