After a surprising introduction to Phoenix's newest recruit, Desi who is MacGyver's friend and their team are assigned to escort and protect an ATF (alcohol, tobacco, firearms) gun-sniffing dog who has a bounty on his head, only to discover they’re not the only ones crashing the weapon drop.

Mac is towelling off after a shower. A woman is eating his snacks and critiques his choice of flavor. Mac grabs a badminton racquet and holds it between them, demanding to know who she is and how she got in. She remarks that his alarm system is a joke and his locks could be picked by a toddler. "Jack said you were smart. So far I'm not convinced." She introduces herself and says that her friends call her Dez but that Mac should call her Desi. She explains that his home security is her responsibility, and that his current setup is completely unacceptable. She goes on to say that she expects to hate babysitting him. He asks why she's there then. She says she owes Jack, but declines to say for what. She tells him to hurry so that he's not late for work. She gives him an object lesson in security, and walks away.


Riley Davis: You know, I've never met anyone more prickly and opinionated. I think I kinda like her. 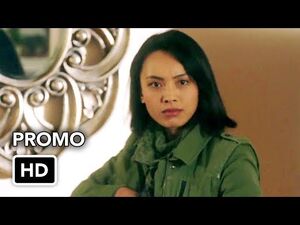 Retrieved from "https://macgyver.fandom.com/wiki/K-9_%2B_Smugglers_%2B_New_Recruit?oldid=16474"
Community content is available under CC-BY-SA unless otherwise noted.