Large Blade is the 13th episode of Season 1 in the 2016 reboot version of MacGyver.

On the way back from capturing a war criminal, Mac and Jack's helicopter crashes in a remote area of Kazakhstan, injuring their pilot and allowing their prisoner to escape with Jack’s gun. Using a large blade and a water bottle, MacGyver must get help as the pilot’s condition worsens and before the war criminal takes them as prisoners.

When the chopper carrying Mac & Jack is shot down in Kazakhstan, injuring the pilot and allowing a war criminal to escape, Mac must recapture him before he calls in reinforcements. Also, the team meets Matilda Webber, the new director of The Phoenix Foundation, who happens to be Jack's ex-boss.

Angus MacGyver: Well, this certain detail is somewhat important, because it's the difference between your gun being somewhere out here or in the hands of someone who knows how to use it to kill people really well.
Jack Dalton: Well, when you put it that way, it doesn't sound real good.

Jack Dalton: That’s the best crash landing I’ve ever been apart of.

Wilt Bozer: (What Mac's grandfather told them while camping) All you need to survive, is what’s up here, (points to his head) and what’s out there.

Jack Dalton: Look at that- act like we’re talking about something...
Jack Dalton: ...You think she’s impressed with my tracking skills?
Angus MacGyver: No. I think she’s married.

(after getting his gun back from Victor)
Jack Dalton: Two round?! Victor what have you been shooting at!

Angus MacGyver: Uh, any last words?
Jack Dalton: Well, I don't know. I ain't gonna say I love you or anything.
Angus MacGyver: Yeah, I--I don't love you, either.

Wilt Bozer: Maybe I should have worn a tie?!
Jack Dalton: Yeah, it wouldn’t have helped. 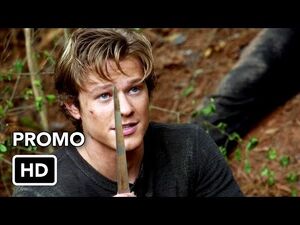 Retrieved from "https://macgyver.fandom.com/wiki/Large_Blade?oldid=16567"
Community content is available under CC-BY-SA unless otherwise noted.