The Phoenix must recover the body of a pilot whose plane crashed while testing an experimental laser mapping system that MacGyver designed. Also, Riley tries to identify the hacker who tricked a SWAT team into arresting her and Elwood.

Elwood is trying to explain an increase of units shipped to Riley, using his laptop which fritzes out. He gets frustrated and Riley tries to calm him down. He is convinced that his inability to get through the demo at home means that he can't get through his first day on the job. Riley points out that he was almost there. She questions, however, why he lied on his résumé, but he explains that he wants the job of inventory associate at a distribution warehouse. Riley approves of the job, calling it karmic justice that he has to make sure that things don't get lost or stolen (given his record). Riley says that (white lies aside) she's proud of him. Suddenly, the LAPD breaks through the door, immobilizes them, and tells Riley that she's under arrest. 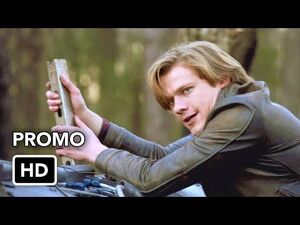 Retrieved from "https://macgyver.fandom.com/wiki/Lidar_%2B_Rogues_%2B_Duty?oldid=16472"
Community content is available under CC-BY-SA unless otherwise noted.