Mac and Jack hit the road for a weekend of relaxation in Las Vegas, but their mini-vacation is cut short when someone from their past abducts them and locks them in a concrete room. Also, Matty tasks Riley, Bozer and Leanna with stealing a diamond encoded with terrorist intel from a princess in Milan.[1]

In Mac's home, Mac and Jack are taking a selfie to mark the start of their seven-year manniversary trip to Vegas. Mac points out that they actually met seven and a half years ago, but Jack counters that the manniversary doesn't commemorate their first meeting but rather the day when Mac stopped being so annoying that Jack just wanted to choke him out. Jack tells Mac to use a lint roller and get his hat. Mac says he doesn't want to wear a hat and doesn't understand why he already has to be wearing a suit. Jack explains that real men dress like that, and it's how they should show up in Vegas. Mac complains that his suit will get wrinkled, but Jack shows him the portable steamer. Mac says that it's unnecessary, since surely they'll be called back to work immediately anyway, but Jack says that Matty has promised to give them some time off unless they're the only people standing in the way of the zombie apocalypse. Jack is very excited in spite of Mac's lack of enthusiasm.

On the road, Jack starts detailing the itinerary. Mac expresses hope that he can just relax by a pool, but Jack points out that they can do that in SoCal any time, and if they're taking a trip to Vegas then they should do stuff they can only do in Vegas. Mac starts to complain, then a van hits their vehicle.

Mac and Jack's mini-vacation is cut short when Griggs from Mac's first mission apart of DXS abducts them and locks them in a concrete room as revenge for leaving him and another agent Hadley in a mission gone wrong in Jakarta. Mac fakes Jack's death to reveal Griggs's identity and has Jack shoot him, although he survives and is captured. Meanwhile, Matty tasks Riley, Bozer and Leanna with stealing a diamond encoded with terrorist intelligence from a princess in Milan. Bozer asks Leanna to move into a new apartment with her as a new stage in their relationship 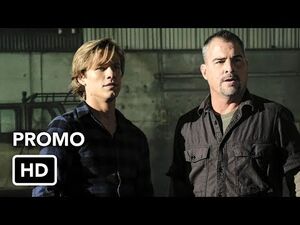 Retrieved from "https://macgyver.fandom.com/wiki/Mac_%2B_Fallout_%2B_Jack?oldid=16482"
Community content is available under CC-BY-SA unless otherwise noted.