Murdoc + Handcuffs is the 15th episode of Season 2 in the 2016 reboot version of MacGyver.

After one of Murdoc's go-to assassins agrees to hand over Murdoc to MacGyver in exchange for $10 million, the team finds itself protecting Murdoc from his former mentor, Nicholas Helman, who wants him dead. Also, Jack realizes he may still have feelings for Riley’s mother, Diane.

(playing charades)
Matilda Webber: How are you a genius everywhere else, and so bad at this stuff?
Wilt Bozer: We discussed this, Mac. Keep it simple and nontechnical. It's charades, not How It's Made.
Angus MacGyver: Yeah, I get lost in the details.

Jack Dalton: And what's with that soap opera stopwatch? It's not regulation.
Matilda Webber: It's an antique.
Angus MacGyver: I like it.
Matilda Webber: Thank you.
Wilt Bozer: Do you want to take it apart and see how it works? You're much better at that than charades.

Henry Fletcher: In 12 hours, we are willing to hand Murdoc over to you. All we ask in return is $10 million in cash and-
Jack Dalton: Oh, is that all?
Henry Fletcher: I'm not done.

Diane Davis: Now could somebody tell me what's going on?
Jack Dalton: We just made a deal with the Devil to catch Satan himself.

Jack Dalton: Do me a favor, Looney Tunes.
Murdoc: Anything for you, Jack.
Jack Dalton: Ditch the creepy smile or I'll hop back there and slap it off your face.
Murdoc: I'm sensing some anger, Jack.

Jack Dalton: Take cover now! ho is this guy? Friend of yours?
Murdoc: We both know I don't have friends.

Jack Dalton: Hey, what's so funny? What are you laughing at? Huh? This was all part of your plan, wasn't it, crime genius, huh? Dangling yourself out there as bait to get us all blown up. Ha, ha, ha, very funny.
Murdoc: Come on, Jackie boy, you know me better than that. If I was behind this, you'd both be chained to that helicopter as it burned in midair, right, huh? I don't know. Face-to-face, screaming in absolute terror as you plummet to a beautiful, fiery death.
Jack Dalton: What is the matter with you?
Murdoc: I'm just spitballing here, but you get the point.

Angus MacGyver: So the real question is, Murdoc, who wants you dead?
Murdoc: Pull up a chair, boys, this could take a while.

Angus MacGyver: We need to let the Phoenix know we're still alive.
Murdoc: Why don't you just kill that nice woman - and steal her cell phone?
Jack Dalton: No.
Murdoc: Fine. I don't know how you two get anything accomplished.

Jack Dalton: Matty, I think we're in business. Our psycho recognizes your psycho.

Angus MacGyver: You joined a foreign military? I'm pretty sure that's treason.
Murdoc: See, I had a burgeoning interest in shooting people. My new friends were willing to indulge me. See, what the U.S. saw as a problem, my new friends saw as a gift.

Jack Dalton: Why don't you fast-forward to the part where he wants to put your dumb ass in the ground.
Murdoc: I can think of two possible reasons. One: I stiffed the guy on a bill at a diner in Lisbon. Still owe him $13. 57. Or two: I, uh, murdered his wife right in front of him. Probably the second one, huh? -
Angus MacGyver: Safe bet.

Murdoc: Remember when I said Helman was better than me?
MacGyver: Let me guess you tried to kill him, missed, killed her instead, and he's been chasing you ever since.
Murdoc: 10 points for Gryffindor, Angus! Yeah, see, that's why I've never stayed in the same place for long I always figured Helman would catch up and make good on his promise to end me. Looks like today's the day!

Nicholas Helman: Your two agents have no idea what they're stepping into the middle of. So here's my proposal: you give me Dennis, and I'll let them live.
Matilda Webber: Dennis?
Nicholas Helman: Well, you might know him as Murdoc. But it doesn't matter what is on his tombstone, because there will be a tombstone real soon. The only question is, will there be three?

(broken phone)
Jack Dalton: You want me to catch a pigeon?
Angus MacGyver: Actually, I can fix this.
Jack Dalton: What?
Murdoc: I actually tried raising pigeons once.
Jack Dalton: Shut up.

(tells a story about killing pigeons)
Jack Dalton: What's the matter with you?
Murdoc: You like things that go boom. I thought you'd like that story.

Murdoc: You know, I love watching you work, MacGyver, but this is completely unnecessary. I mean, you two are protecting me, supposedly. It'd make no sense for me to run away.
Angus MacGyver: Well, even if it did, now you can't.

Murdoc: MacGyver, do you know why your dad left?
Angus MacGyver: I used to think I did. I told him I blamed him for my mom's death right before he left. But you know what? I was a kid, I was hurting. He had grown so distant after she'd passed, I just I guess I wanted to see if I could get a reaction out of him.
Murdoc: You ever consider murdering him? I don't want to get all Freudian on you, but there is absolutely nothing as cathartic as killing your own father. Trust me.

Angus MacGyver: The only thing I couldn't make was a spoon. So you want to, you want to drink some beans?
Jack Dalton: That's disgusting. No, I'm-I'm all beaned out.
Murdoc: Oh, if he doesn't want the beans, can I have them, MacGyver? What? They look like delicious beans.
Angus MacGyver: Knock yourself out.

Angus MacGyver: Point is, I don't know why I'm wasting so much time and energy on someone who didn't care enough to stick around - in the first place.
Jack Dalton: Right, right. You know, I-I know I'm beating a dead horse here, but that's the way family works sometimes, man. It can take a man years to realize he's made a mistake.
Angus MacGyver: Is this about you now?
Jack Dalton: Well, I thought you were done.

Angus MacGyver: You two looked like you were having fun at the party. Well, you know, before the assassin/school teacher showed up, I mean.
Jack Dalton: Yeah, that's partially why I left her the first time.

Angus MacGyver: Well, we can't stay here. Let's go.
Murdoc: Can I have my can of beans? -
Jack Dalton: Your b -
(Mac gives him the beans)
Murdoc: Thank you.

Jack Dalton: Well, so much for getting off that train before he spotted us.
Angus MacGyver: More good news. We can't get in.

(re: taking Murdoc's cuffs off)
Jack Dalton: If there was a contest for all-time worst ideas, - this wins the blue ribbon.
Angus MacGyver: We don't have a choice.
Jack Dalton: (pointing a gun at his face) Ditch that creepy smile.

Jack Dalton: Yeah, the only reason I'm telling you is so you don't blame me when I can't save your skinny ass.
Angus MacGyver: Well, if you can't save me, it's 'cause I'm dead, so there'll be no blaming, I can assure you.

(after 'saving' Mac's life)
Murdoc: There is something that I would like in exchange for my bravery and heroism. 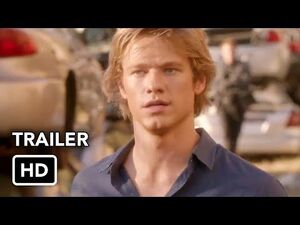 Retrieved from "https://macgyver.fandom.com/wiki/Murdoc_%2B_Handcuffs?oldid=16785"
Community content is available under CC-BY-SA unless otherwise noted.