Revenge + Catacombs + Le Fantome is the 8th episode of Season 3 in the 2016 reboot version of MacGyver.

MacGyver and the team set off on a dangerous capture operation after an Irish military intelligence officer approaches them claiming to know the whereabouts of “The Ghost,” a lethal bomb maker whom Mac has been hunting for years.

In Afghanistan in 2011, Mac and Charlie Robinson were disarming everything they could on the Day of 1000 IEDs. Four hours into their day they arrived at their next assignment, where a wooden box was partially obscured by brown paper. It contained an IED using antique clock mechanisms. Mac and Robinson talked about how skilled the bomb maker must be.

In the present, Mac was sitting in a tuxedo on a folding chair at the Veterans Annual Charity Dinner. He roused himself from reverie when everyone around him started to applaud, and he absent-mindedly joined in. At his place on the table sat a picture of Sgt Alfred Pena. A veteran began to give a speech about overcoming what had happened to her.

Later, Riley offered Mac another beer at the bar, and he wasn't sure whether he wanted it. He told her that he was in his head, and then confided that he and Nasha were "taking time apart" after the events surrounding Murdoc kidnapping her. They talk about how their job impacts their happiness, and Riley leaves to take win back to the table. Eileen Brennan approached the bar, and ordered "whiskey, straight up." She introduced herself to Mac, who reciprocated, stumbling over his words. She "guessed" that he used to be in the army, and revealed that she worked for British Intelligence. She then alarmed by revealing that she knew details of his service record and that she had been in Afghanistan at the same time as him in 2011. She then told him that she had come looking for him because they had something in common: The Ghost had killed people they loved. She said that she knew where he was, but that they had to leave immediately.

In an empty meeting room, Matty tells Brennan that she had verified her credentials. Riley, Mac, and Bozer stand nearby. Matty asks why British Intelligence hasn't acted. Brennan admits that the evidence is too thin for her outfit to act. She is on a leave of absence, looking for MacGyver so that they can track down The Ghost together. Given that The Ghost came all the way to LA to kill Mac, he must consider Mac to be a threat. Brennan believed that the Russians had captured The Ghost without realizing who they had. Matty said she would love to authorize an immediate operation, but she needed proof. Brennan played a recording of an Irish man protesting his ignorance, which she said was the same voice she had heard just before one of The Ghost's bombs killed one of her parents.

Matty and Mac move to one side to discuss it, then Matty orders Mac to go.

Angus MacGyver: All right, Patrick, tell us where you were taking The Ghost, or I'll hand you over to the Russians.
Riley Davis: Yeah, bet they'll be real excited to meet the man who just bombed one of their army installations.
Patrick Quinn: (Says something)
Wilt Bozer: I'm sorry, what was that? Elvish?
Eileen Brennan: It's Irish.

The Ghost: Looking back on it now, I should've just killed you right there. But I was trying to set a record, you see. 1,000 IEDs. Instead, you set a record. You diffused how many? More than 100? An accomplishment. I decided that day, when I saw how good you were, that I needed to take you out as soon as possible.

Riley Davis: And check this out: it wouldn't be the first time that Douglas was targeted for an assassination. 20 years ago, Douglas was a young British defense minister when a bomb the MI5 believes was built by The Ghost and intended to take out Douglas at Parliament detonated in an apartment building just four miles away. The blast killed a young couple and orphaned a little girl. 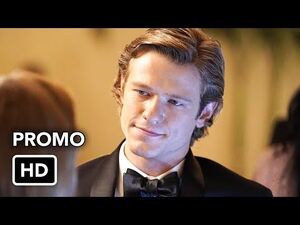 Retrieved from "https://macgyver.fandom.com/wiki/Revenge_%2B_Catacombs_%2B_Le_Fantome?oldid=16488"
Community content is available under CC-BY-SA unless otherwise noted.