Royalty + Marriage + Vivaah Sanskar + Zinc + Henna is the 12th episode of Season 5 in the 2016 reboot version of MacGyver.

Mac, Desi and Russ go undercover during a royal Indian wedding to protect a princess whose policies could put her life in danger. Also, Russ and Sophia come face-to-face at the wedding, Bozer suspects Riley is up to her old hacking ways and Matty runs down a lead in hopes of getting to the bottom of Mac and Riley’s ingested nano-trackers.

Desi and mac are together and wanted to discuss the ring that was forcibly revealed by Murdoc. Things has been tough for them. Desi reveals that she ewas engaged to another person in her unit but ended because he died. They are interrupted by Matty who had called. They were to infiltrate a wedding in India between Rani Kunari, the daughter of King Sunil of a place in India and Oliver Hughes, the son of the British Prime Minister. They needed security due to threats. This was meant to be a weekend “getaway”.

There tensions for the choice of marriage. The wedding is invite only but Riley is able to hack were into it, invigiting them via as three profile people. Mac, Tyalor,a nd Desi are sent to infiltrate it. Matty was confirmed that some nanotrackers had to be found.

Lading in Bikaner, al three dress up and attend the reception. Russ is identified by somenamed Sofia. Mac and Desi look at the list of itinerary for the event. Sofia recognizes and respects that he is someone ses and that she had a date. Mac have used his phone so that he can identify potential people. Desi bumps into the princess bride to be, but is called away by her ex fiancee's current girlfriend.

Soon, the three intercept the princess who was being dragged away, and are “arrested”, but are released by the princess and someone who is the king's top adisor. They interrogate a kidnapper but kept silient, who is part of the Blue Arrow. Riley detects that a his trust fund is being used and sent a lot of pounds for osmething else. Outside the room they are in, it is Sofia, who hey talk. AT Pheonix Headquarters, they try to look at video s of people to see if they can turn people for their gain to advantage, and determines to a person who could flip.

Back in India, Oliver Hughes is confronted about the wedding is supposedly used for a deal,b ut it turns out it is not. Rani comes out after hearing it. Sumita wants the wedding postponed but Rani wants Desi as her own security for the weekend.

Simita and Desi talk but are called to the interrogation room where the man had already died by strangulation. Mac uses chemical processes to find the time and thing for the henna stains to make an attempt to determine the time.

Later at a party on the first weekend, Desi and Mac discuss the painful fiancess and previous relationships she went through. Taylor and Boser are on watch, witnessing the ex girlfriend who leans due to heartbreak. Sofia approaches Taylor at his room, and Taylor suspects that she got enough information from him so she left to further her career to and find a treasure; thus she got a count from Austria to fund it so her family can get money and restore their name. Russ kicks her out.

The next day, the henna test is done and determine the time henna was applied and Riley searches images. It was determined that Sumita is the killer of the person in the interrogation room. A parade is in action and and people are everywhere.

Mac confronts Sumita, and smells ammonia nitrate , indicating a bomb, but Taylor makes no way in dealing with the crowd partying. Guards attempt to kidnap Rani but are taken down by Desi. Mac made a makeshift detector and find it in a drum; which was big enough to kill everyone at the altar. They put it under some pots so that the bomb explodes. In the end, Sumita is arrested. Rani has her wedding. A party occurs afterwards. At the party, Mac and Desi get together. Sofia nad Tyalor talk together again, and tells him about the connections of the count, who had tieds with the Nazis. At Pheonix headqquaters, some things had to be resolved.

Mac, Taylor, and Desi are sent to infiltrate a wedding in India. 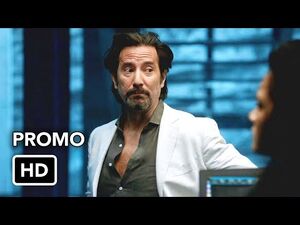 Retrieved from "https://macgyver.fandom.com/wiki/Royalty_%2B_Marriage_%2B_Vivaah_Sanskar_%2B_Zinc_%2B_Henna?oldid=16432"
Community content is available under CC-BY-SA unless otherwise noted.