SOS + Hazmat + Ultrasound + Frequency + Malihini is the 8th episode of Season 5 in the 2016 reboot version of MacGyver.

Mac and team rush to help when Matty's former mentor, Ian Cain and his embassy staff come down with a deadly, mysterious illness. Also, Taylor and Bozer work with Jerry Ortega to infiltrate a Codex cell.

Operatives are interrogating Jerry Ortegga when he reveals he knew information about CODEX. It is revealed he had worked as a drop. In the headquarters they talk when Webber says she needs to go on a mission with MacGyver. It is personal.

On the plane, they are briefed on Ian McCain, who has sent out an SOS signal. They arrive at a import export insurance shop; this is a front for a CIA safe spot. Entering, they discover people had abandoned the office with immediate effect and no early prep. They press a button, which activates a code, and that it SHUTs down. They realize that there is a safe spot in each safe spot and they go up to the roof and enter a code. Ian is in side a crevice and is still alive but taken to hospital.

At the hospital, Ian tells Webber that all the embassy staff started developing illness. They needed aid to solve this. As they leave, Ian convulses and requires immediate help. Desi and MacGyver immediately dons hazmat suits and enters the building. They examine the place with technology but are not able to determine a source. Both suddenly suffer with a mysterious set of illness including bloody noses.

Meanwhile at Phoenix headquarters, Bose, Taylor, and Jerry had been scouring the dark web for any track of CODEX. They manage to attract the attention of one person and they set up a meeting at a restaurant. At the restaurant, they meet the person and they force him but force him to go along as well.

Meanwhile, Riley detects a van in multiple places that was aiming at the basement. Heading there, Mac and Riley are confronted by a “Hazmat” team from the State department that was scheduled to decontaminate the premises; It turns out they are not and are beaten away. A use of the microwave and attack machine and they are incapacitated for the moment. Recovering, they get to a a meetup with Ian, who has recovered, Riley, and Director Webber.

Riley had looked into social media feeds, and catch an image in the background of the van and a person. Ian reveals the person is an ultra nationalist soldier after a thing. Ian reveals the things stolen from the safe house that contained research from the cold war; these were research into a super weapon that was not functional. The nationalists managed to build one that is fully functional.

A tracking device locates the van and they give chase. It was used on the car Mac and Desi used, causing it to catch fire. Entering a parking garage, they use a fire extinguisher. A showdown shootout occurs and Mac users the sound system to knock them out, with police coming.

Back at the restaurant, Jerry is confronted in the kitchen where the buyer knows she was hired somewhere and threatens to slice off fingers for answers. Taylor and Bozer come in and attack them , knocking them all out.

Outside, Jerry hands over content he swiped from them, and then steps on a bus to his desired destination. At headquarters, Angus finds Taylor in the war room; Taylor had decrypted the drive; Codex had reached out to all the sleeper agents in the world.

Two bolts to break a lock.

Rolling balls to detect changes in momentum in grounds. 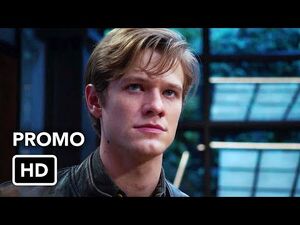 Retrieved from "https://macgyver.fandom.com/wiki/SOS_%2B_Hazmat_%2B_Ultrasound_%2B_Frequency_%2B_Malihini?oldid=16646"
Community content is available under CC-BY-SA unless otherwise noted.