Mac and Riley are attacked by a group of masked men after the government calls them in to examine a mysterious object that crash-landed in the Nevada desert. Also, Riley uncovers new information about Mac’s father but questions whether to deliver it to him after he says he needs to move on.

Angus MacGyver Just here to help, okay?
Dr. Isaac Herman: Great. Then keep quiet and try and stay out of my way. I'm briefing the Secretary of Defense in four hours and I need to focus, not babysit a couple of kids.
Angus MacGyver Einstein wrote the Annus Mirabilis papers when he was 26 years old, so maybe give us a chance? Another two sets of eyes couldn't hurt.
Dr. Isaac Herman: Guess we'll find out.

Angus MacGyver Considering they're doing a sector by sector grid search for us and we can't call AAA, I think we're heading to Area 51 on foot. 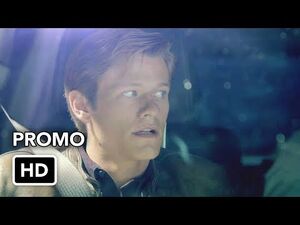 Retrieved from "https://macgyver.fandom.com/wiki/UFO_%2B_Area_51?oldid=16511"
Community content is available under CC-BY-SA unless otherwise noted.